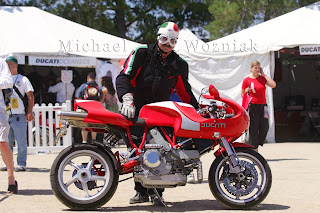 Well, here we are again, on Wednesday, September 23rd, 2009 and I've dropped off my Honda Blackbird at Berkeley Honda for an updated service and to find out what that annoying "clunk" is when riding. I found out yesterday that after 23,000 miles, it's time for a valve adjustment (needed at 16K) and I need a new chain, and the carbs apparently need to be synchronized. So, it's in Berkeley. I have the Ducati PS1000LE here at home this week, along with the Buell White Lightning which now has 2010 tags on the plate.

I drove out to move the Concours from Tonya's garage to Mom's garage yesterday, and dropped off the Kawasaki in the garage so I could bring home the white Buell. I need to burn some of the old gasoline from several of the motorcycles, so it's going to be riding out to Mom's on one motorcycle and riding home on another to get the fluids moving, burn old gasoline, and keep the batteries charged. There's the RC61, the Buell S-1, the Hailwood, and the Storz Sportster that are at the top of the list. Hopefully, the Blackbird will be back in good shape soon.

I'll be at work tonight at Dick's, and tomorrow night too. Lots going on the rest of September, and October is Halloween preparation all month.