We have one of these cars.  It goes to the history of the WozPin, and the longevity of keeping something around.  Lots of fun in this car of ours, and it's still parked in the driveway.  Now, to find the next worthy owner.

From Wikipedia, the free encyclopedia
Jump to: navigation, search 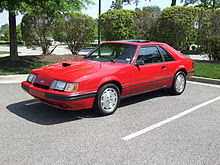 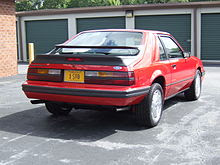 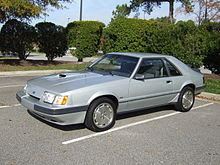 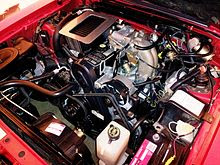 86 SVO engine bay
The Mustang SVO was a limited-production version of the Ford Mustang sold from 1984 to 1986, during which time it was the fastest, most expensive version of the Mustang available. Although it departed both physically and mechanically from any prior version of the Mustang, it held the same spot within the lineup, both in terms of performance over "lesser" variants and in prestige, as had variants such as the Shelby tuned and "BOSS" Mustangs of the 1960s and 1970s.

In the wake of the oil crisis of the 1970s, the American muscle car had effectively died off, the result of ever-rising fuel costs and the advent of more strict safety and emissions controls imposed worldwide. As a result, the "big three" automakers (Ford, General Motors and Chrysler Corporation), for whom muscle cars had been a steady and reliable source of income, began to suffer somewhat financially. Many of the great vehicles of the muscle car era had been either completely discontinued or had been painstakingly detuned to help keep them in compliance with new Federal emissions regulations and the rising demand for better gas mileage. The Mustang, although still in production, had suffered greatly through this time; diminished power output and Ford's seemingly complete inability to come up with an attractive body style in the post-fastback era were major issues.
Ford began to make a major push forward with the Mustang in 1982, nearly completely reinventing every aspect of the vehicle, which included putting a new emphasis on the model's sporty nature. Just prior to this, in the fall of 1981, Ford decided to form a division that could oversee both the company's racing program and the production of limited-edition, high-performance street-legal vehicles based on or taking technology from the race vehicles. Officially, the division was called the Special Vehicle Operations Department, but the public came to know them as simply SVO (S-V-O). Tasked with developing something that was both plainly American and competent to compete with entry-level European sports cars of the day, the team went to work on the new Mustang, deeming that it was the most obvious choice as a platform basis for a high-performance vehicle. 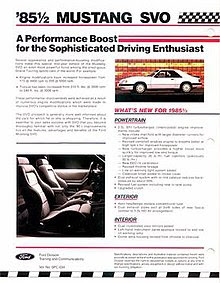 Still ultimately concerned with issues such as fuel consumption and emissions, SVO engineers opted to pass over the venerable production 5.0 liter V-8 in lieu of an updated, turbocharged, and stronger version of Ford's 2.3 liter inline four, originally used in the Pinto. Endowing the engine with an advanced, computer controlled fuel injection system and an intercooled turbocharger system helped push power output to 175 horsepower, fairly high for the time. In addition, a "fuel grade" switch was added to the dash, allowing the driver to adjust the vehicle's performance level depending on if premium or standard grade fuel was being used. A factory installed Hurst shifter was made standard in order to improve feel and quickness. With fine tuning and the addition of a new water-cooling system, power output rose to 200 horsepower (149 kW) for 1986 (205 horsepower (153 kW) for 439 85.5 SVOs). Also the 1985.5 and 1986 SVO had new "aero" headlights. These headlights were designed for the 1984 model, but regulations would not allow them to be used until the mid-1985 update. The vehicle's standard Borg-Warner 5-speed manual transmission was updated then as well, receiving revised gearing to match the new 3:73 rear end ratio,

In addition to the advanced engine, the SVO featured several key modifications over the standard Mustang to help increase performance. The front suspension geometry was modified, 15:1 ratio power-assisted rack-and-pinion steering system replaced the standard system, a limited slip, 3.45:1, 7.5" Traction-Lok axle was added for the first year of production (later models used a 3.73:1 ratio, 7.5" axle), a new, ventilated four-wheel-disc braking system (sourced from the Fox platform Lincoln Continental) replaced the GT's disc/drum setup (a first for the Mustang), specially designed pedals were used to aid "heel-and-toe" shifting and a complete Koni suspension system featuring specially tuned adjustable struts, shocks, and horizontal dampers replaced the setup used on the Mustang GT. Five-lug, 16 × 7 inch aluminum wheels wearing P225-50R16 VR Goodyear Eagle "Gatorback" tires were standard as well (originally shod with German Goodyear NCT tires, and later Gatorbacks). The rear disc brakes, the five lug hubs, the sixteen inch (406 mm) wheels, the quad-shock rear end (early 84 units used a solid steel traction bar with a rubber cover), and the Konis were used on the SVO before any other Mustang.
Interior was only available in charcoal grey (leather or velour) and features included adjustable sport seats with lumbar supports, a leather-wrapped tilt steering wheel, shift lever, and emergency brake handle, power windows, door locks and A/C and a premium stereo system, options that weren't normally found on small American coupes. However, an optional Competition Prep package deleted many of those features to save weight.
The exterior had a unique front grille and hood that was only used on the SVO line, thinner side moldings, smoother sail panels behind the rear quarter windows, small rear wheel spats and a biplane spoiler that was also unique to the SVO. The pinstriped taillights introduced on the SVO were later used on the 1993 Cobra model as well.
Posted by Woz at 1:10 PM